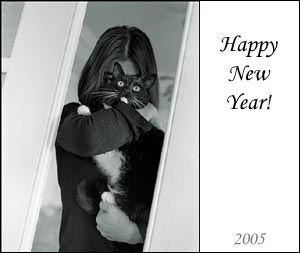 When nature unleashes its power on the world, we humans are not the most resourceful. The continued climbing number of Asia Tsunami death toll serves as a sad reminder that life is fragile and so often disaster struck without any sign or warning. We live today, now, present. Wishing you all a Happy New Year! Wish you all could enjoy life to its fullest, and live without regret.

Hereare the photos from our Christmas Eve.

So the news is out, the numero 6: Harry Potter and the Half-Blood Prince will be out next June! Via Reuters Entertainment News.

Maybe i should schedule a long flight to coincide with that event! 🙂 Just imagine the world blanked by “blue”(I wonder which color the cover is going to be this time?*) covered book again. .. ah, heaven! :))))

Went back to re-read my little stories with Harry Potter 5 in the summer of 2003. Funny, feels like some kind of holiday…The anticipation and excitement in the air…
– Harry Potter and Nemo, July 2, 2003
– The Ubiquitous, Titanic then, Harry Potter now, July 7, 2003

*: According to amazon.com, it is going to be purple!

One distinctive indicator of the approaching holidays is the carelessness mood in the office. No one feels like working, people come in late and leave early. Bosses become more tolerant and understanding during meetings, not to make them go on too long, knowing that no one is really 100% there; and not to expect much get done before the end of the year.

It is a humanistic point of view. It makes one feel warm and fuzzy, because it is one time in the year that one can feel justified to be a slacker.

Tolerating other¡¯s weakness is a virtue, isn¡¯t it? It makes us feel good about ourselves, too. Maybe cause at the same time, our shortcomings are equally forgiven.

As programmers, we came in this Monday to a lovely present. For the entire engineering department, everyone¡¯s old clunky CRT monitor was replaced by a spanking new 19¡± flat panel LCD.

I can now increase the resolution to 1280 by 1024 pixels, and increase my editor¡¯s size, and my screen real estate almost doubled. I could fit in almost twice as many lines of code at one go. Lovely!

All day long, the office gossips were sprinkled with talks revolved around our new monitors, how to collaborate, how to enhance the viewing pleasure, what are all the new tricks these monitors can do. For example, apparently we could turn the monitor 90 degrees and make the screen dimension resembles more to a notebook with shorter width and longer height! How revolutionary!

The synopsis of Closer made me think of a romantic comedy. Lighthearted, and minimum thinking required. Like Something About Marry, or My Best Friend¡¯s Wedding. So I wasn¡¯t enthusiastic about it. But all the raving reviews changed my mind. Even NPR was recommending it, maybe it was worth a look before it leaves the theatre.

Not sure if it was because the backdrop was London instead of New York City, the entire movie¡¯s tone gave out a feeling of wear and tear, as if a half torn poster struggling to stay on the stone wall of a small but ancient alley way.

The edit of the movie kept me constantly on my toes. The scene changed, different environment, but the same characters as in the previous scene. I would think it was the following day, or maybe even the evening of the same day. A few dialogs exchanged between the characters, then suddenly someone let on that a few months and sometimes a year had passed! Simultaneously, I needed to readjust my frame of mind, to replay the beginning of the scene in my head with the adjusted timeline, and to keep an eye on the progress on the current scene. Whew!

Thinking back, I wonder if this potential of misleading audience was intended by the director. In relationship, how many of us can be sure of what we perceived to be real? How often did I only see what I expected to see? How often did I had to go back and ¡°replay¡± the real life with a different frame of mind in order to understand how I arrived at where I was?

The story itself remained with me. Four people, two couples, and intertwined relationships. Everyone called upon love readily, to excuse, to justify, to claim, to discard, to comfort, to doubt. I liked it that the movie didn¡¯t try to lecture, nor did it pass out judgment.

What is love, really? Who could be the judge? Aren¡¯t we all on our own when it comes to love? How many shades do love possess? Who can know?

Alexander the Great
Pure garbage.
Not sure why movie reviewers had been so reluctant to pass out the ¡°F¡± grade. It is not just Oliver Stone¡¯s worst movie, it is not just because Colin Farrell is a weak actor, it is not because it focused on Alexander¡¯s bi-sexuality, it is because all of the above and many more. It is a a lousy movie, period. Its being Stone’s baby just proved that a movie maker genius could make garbage. And Colin Farrell wasn¡¯t much worse than the others.

The movie is not even entertaining. It is boring and lacks substances. I had no idea what Stone was trying to say. It might just be he had nothing to say. What a waste!

From Today’s NYT: Farmers Being Moved Aside by China’s Real Estate Boom