Another delicious issue that’s waiting to be consumed by a happy reader!

Just reading through the Table of Content, the little greedy me couldn’t make up my mind which one to read first! I wish i could do parallel reading like a multi-processor cpu.

911 got me interested in politics. The months followed the event, I read everything i could find about US foreign policy and politicians involved. I was tracking news like an addict on a daily basis. I remember when I went on my trip to South America in April 2002, what bothered me the most before the trip was how limited the internet access would be during the trip, i was worried to interrupt my news reading habit every morning.

The current financial crisis of the US got me interested in economics. One of my co-workers thought i got myself into day-trading cuz I started to watch every move of the market and keeping track of quite a lot of various informations that might influence the market.

Since i’m in the middle of the knowledge absorption phase, it is hard for me to step away from all these chaos and say anything semi-interesting. But what I could say at this point is that I’m very impressed with Mr. Bernanke so far. And I’d like to read more about him, including that famous paper of his on the Great Depression.

To share something i just found and it was interesting: NYT Oct 26, 2005: At the Fed, an Unknown Became a Safe Choice

A couple of books by Bernanke that’s probably worth reading:
Essays on Great Depression
Inflation Targeting: Lessons from the International Experience

Just realized that I’ve spent half of my life in the San Francisco Bay Are.

Our first home was a tiny in-law unit in the infamous BayView district of San Francisco. A relatively quiet corner that was filled with mostly Chinese new immigrants. Later when our financial situation improved, especially when I graduated from college and started working, we bought our first house in Fremont. Lucky enough, it happened to be during one of the worst recession in people’s recent memory. So we bought at the time that housing price was lower than usual. Nowadays with credit market disaster in full force, people started referring to that period in the past as if telling monster stories to kids when they misbehave.

I moved back to San Francisco four years ago when ZM came to the Bay Area to join me, in a rental unit in our lovely central neighborhood next to Golden Gate Park and Haight Ashbury and not that far away from Cole Valley where I took my shuttle to work every day.

The image of San Francisco as a city remained quite static in my mind throughout the years. It is made up of largely the usual tourist attractions: Golden Gate Bridge, Chinatown, Victoria Houses on Steiner street, Fogs over Twin Peaks, Windy Ocean Beach, Fisherman’s Wharf, etc. etc..

The first sign of change was around the dot com bubble time. When i first drove off the new offramp of 280 and landed on the newly renovated King Street. It was the pretties offramp I’ve ever seen in the States, with its tree lined boulevard, wide pedestrian walkway on the side, multi-lane separation for trains, cars, and pedestrians, and the shiny new commerce bubbling along the sidewalk.

Next come my drive along Embarcadero Boulevard. The palm trees and the super wide boulevard, the beautiful street lights and the gorgeous background of Bay Bridge and the bay.

All signs seem to be confirming that San Francisco is getting really good at building lovely boulevard. The new Octavia on ramp was another example of this conviction.

Then last year, we accidentally ventured into the newest neighborhood of the city: SOMA. I was very impressed with their new Border bookstore, and the many boutique shops and restaurants.

The talk of Mission Bay redevelopment started appearing in people’s conversations. But it didn’t materialize in physical form till one morning on shuttle to work, i looked up from my laptop and looked out of the window as we just merged onto hwy 280. What was laid out between the highway and the sparkling bay in the morning sunlight was a scene more familiar to a Chinese than to an American. It was a giant construction site as far as eyes can see, and all kinds of buildings in various stage of completion. There were highrise condo buildings, 8-10 stories office buildings, 4-6 stories mid-rise apartment blocks, separated by creeks that i didn’t know existed south of market, and the view surrounding these soon-to-be glass and concrete creatures was PRETTY.

This is a new design of San Francisco’s very own “Grand Central Station”. This project is scheduled to start construction this year: 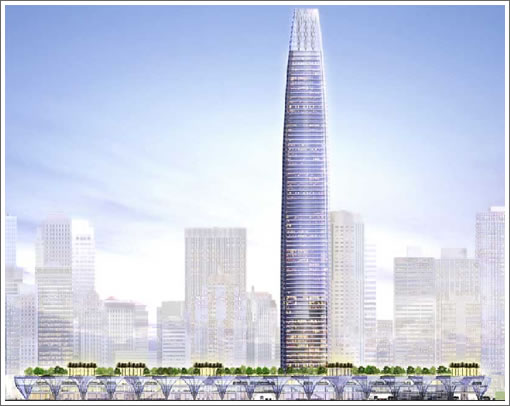 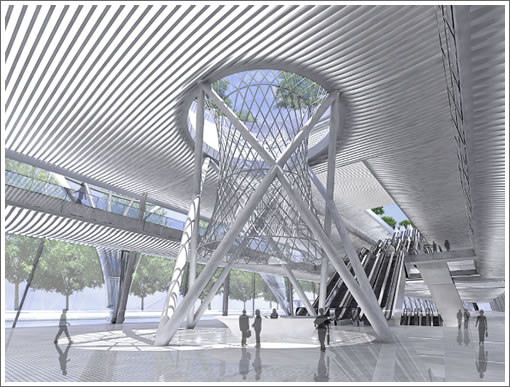 In 10 years, San Francisco’s skyline will be very different from today. Its density is going to increase dramatically. Finally, San Francisco is going to grow into a real City, like Chicago and New York City. I Can Not Wait…