Just found out that Central Chinese TV cut Sean Penn’s acceptance speech at last night’s Oscar from their broadcast. Naturally once it is cut, it gets much wider circulation on the net. Even though I’ve watched the ceremony last night, it looked much better on-“paper”. It is one very well thought out speech. Way to go, Mr. Penn!

ACCEPTANCE SPEECH
Thank you. Thank you. You commie, homo-loving sons-of-guns. I did not expect this, but I, and I want it to be very clear, that I do know how hard I make it to appreciate me often. But I am touched by the appreciation and I hoped for it enough that I did want to scribble down, so I had the names in case you were commie, homo-loving sons-of-guns, and so I want to thank my best friend, Sata Matsuzawa. My circle of long-time support, Mara, Brian, Barry and Bob. The great Cleve Jones. Our wonderful writer, Lance Black. Producers Bruce Cohen and Dan Jinks.

And particularly, as all, as actors know, our director either has the patience, talent and restraint to grant us a voice or they don’t, and it goes from the beginning of the meeting, through the cutting room. And there is no finer hands to be in than Gus Van Sant. And finally, for those, two last finallies, for those who saw the signs of hatred as our cars drove in tonight, I think that it is a good time for those who voted for the ban against gay marriage to sit and reflect and anticipate their great shame and the shame in their grandchildren’s eyes if they continue that way of support. We’ve got to have equal rights for everyone. And there are, and there are, these last two things. I’m very, very proud to live in a country that is willing to elect an elegant man president and a country who, for all its toughness, creates courageous artists. And this is in great due respect to all the nominees, but courageous artists, who despite a sensitivity that sometimes has brought enormous challenge, Mickey Rourke rises again and he is my brother. Thank you all very much.

When we first moved to San Francisco, it took ZM a little over a year to get over the fact that he has left Manhattan, and he started appreciating our very unique San Francisco neighborhood Haight Ashbury.

When we moved to our new neighborhood, naturally ZM started missing Haight Ashbury. Luckily this time it only took him a few month to fall in love with our new neighborhood. The proof is this new project of his, The Mission. As a Christmas present, Gui helped him build a flash site for the project. Lately, ZM mixed some street voices he collected and merged with Jesse Cook’s new age guitar music as the background music. The result is very lovely. 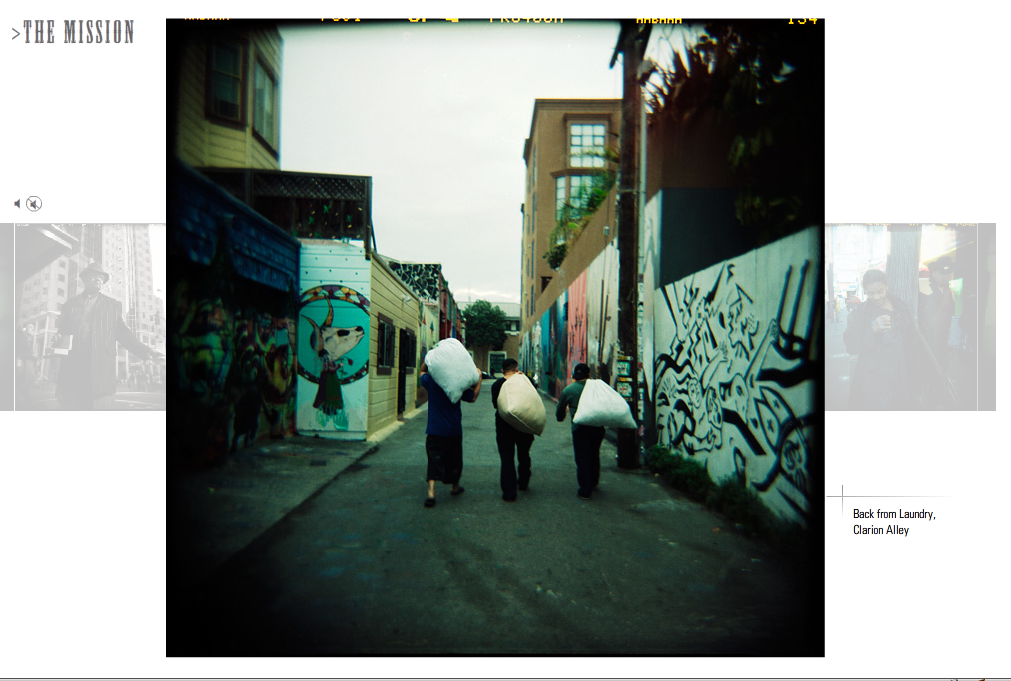 Nothing Gold Can Stay
by Robert Frost

Nature’s first green is gold,
Her hardest hue to hold.
Her early leaf’s a flower;
But only so an hour.
Then leaf subsides to leaf.
So Eden sank to grief,
So dawn goes down to day.
Nothing gold can stay.

Love this! Looking at the parking lot shot, it looks like the Trador Joe’s on Masonic & Geary, which i used to go to when we lived on Cole. Ah, just went over to the maker’s website. It is the Trader Joe’s on Bryant, not Masonic. Their parking lot all look the same! 🙂 And he made this video using Palm Treo! very cool!

At work, we move to a new building almost once a year. After each such move, we often were given a little stuffed animal as a “welcome to your new home” price.

The theme of the stuffed animal differs from year to year. One of them was African animals, and i end up with a zebra.

During one particular not-so-uplifting moment, i left my zebra face down on my bookshelf, legs spread out on four directions, as if it just took a fall. A few days later i noticed someone had lift it up to stand on all fours. I thought maybe someone was in the cube talking to my cube mate and took pity on the poor zebra? Out of mischievousness, i returned my zebra back to the “splash” position, and a day later, it stood up again! This little game has been going on for months. The duration it took for it to stand up seems to have pro-longed, but it always always stood up.

Quite amused. Who was it? Was it one person (janitor?) or random people who walk by and all happen to have the same reaction? Should i put up a webcam to figure it out? 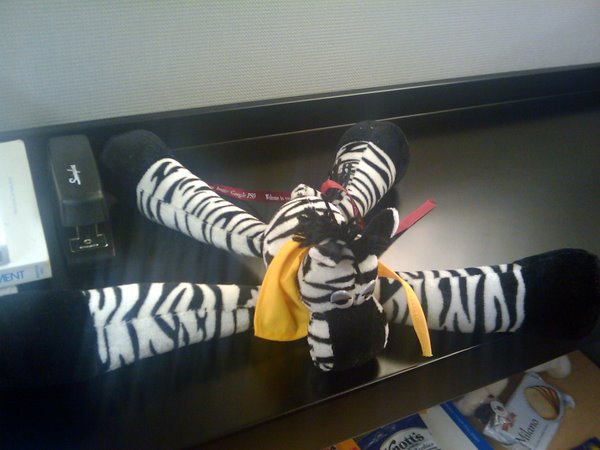 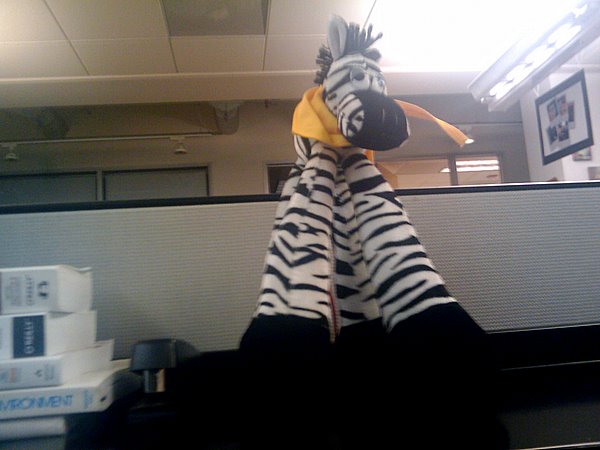