I heard this news report from BBC on my way to work today. It sounds fascinating!

When water is zapped with electricity and electrolysed, it splits into oxygen and hydrogen. In Iceland they’ll use geothermal and hydropower to make that clean electricity. Other countries could use power from wind or the sun. The hydrogen fuel can then be used to power an electric motor via fuel cells in a vehicle acting like a generator. The only emission is pure water. 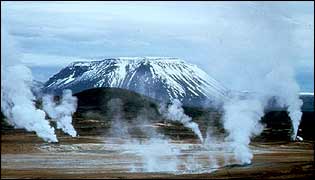 To seperate hydrogen from oxygen takes electricity, to use hydrogen to power a car is the reverse process of electrolysed, which means to put the hydrogen back with oxygen, that process produce electricity that can power the car. The car can get oxygen from air. The final product is just water. It is a silent process as well!

The project is currently founded by three major car companies including Daimler Chrysler.

Icelanders won’t have to wait long to board hydrogen-powered vehicles. Next spring, the first buses fuelled by hydrogen arrive on the streets of Reykjavik. They’ll look like this, but equipped with their silent fuel cells, there’ll be some critical differences. The buses are designed by the car company Daimler Chrysler, …

While listening an image kept on popping up in my head. It was an image of the Texas Econamy versus Iceland Econamy. On one hand, there is this entire country trying to produce a renewable energy resource; on the other, we have an administration that is fueled with power company higher ups. Just imagine how many people’s wealth depends on people continue to use the dirty fossil fuels.

An iceland professor on the show stated that he expected this change will take three generations with him being the first. “Hopefully our grandchildren will be able to live in a much cleaner and peaceful world than us.”

Go and read this! Hydrogen Economy
Now I want to visit Iceland! 🙂