In the afternoon, we went on a short hike in one San Mateo country¡¯s open reserve, to see some interesting cacti atop of the mountains. 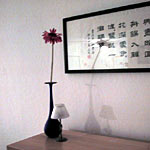 Afterwards we stop by a new plaza Gui has been telling me. They were selling penthouse lofts, which looked beautiful from outside and on paper: sky lights, walk-in closet, marble tiled master bath, powder room, etc. etc.. The price shocked us. ¡°It is only $585,000 for a 1485 square feet one bedroom suite,¡± says the brochure. 1485 is spacious, but $585,000! And ¡°Only¡±!?

Why what we like always seem just slightly above our financial means? So close, yet so far.

While we were having dinner in a pasta place in the plaza, and I was brooding over the injustice of the material world; Matthew suggested maybe we could change our jobs to be stock market traders. To get more money you need to go closer to the source. ¡°Never!¡± I shook my head. Gui remembered the little episode right after my graduation. Out of sheer accident, I was recruited by the president of a small but respectable trading firm, specializing in trading futures, the riskiest but definitely one of the most lucrative trading options. I turned it down then.

Looking back now, I¡¯m surprised at myself. Even then, as a poor college graduate, I knew money was not all I wanted. I was hooked instead on the lifestyle advertised by the consulting company I went to eventually: travel the world and the idea of doing something new every few months. Boredom was far scarier than being poor. Okay, maybe not being poor, but being not rich. 🙂

Well, at least that is the more glorified version of what happened.

Actually the woman who interviewed me did try to scare me. She told me it would be a dog eat dog world on the floor, not many people could survive the first three months. ¡°You¡¯d better not trust anyone around you. Everyone is out for him/herself.¡± She stared at me through her mascara-ed beautiful but cold eyes. She was surprised that her boss wanted me on the team, but it was up to me to decide whether I would be tough enough to survive out there. I thought it over. I wasn¡¯t worried about surviving. I was worried what would happen after I survived. How would I like it to face that kind of hostile environment day-in day-out. Who I would become eventually? All for just money?

Later a friend who went through the interview with the same woman, and who did become a trader on Wall Street told me that I shouldn¡¯t have been intimidated, I would have been fine. It was not as bad as that woman had described. She was merely trying to scare me off.

Much later I met Caroline on my Ecuador trip. She had been a trader on the London Stock Market and she loved it. We got along great and she was a wonderful person.

Maybe in a parallel universe out there, I did become a trader, living in a spacious penthouse loft in the city and thinking of early retirement?! Ha. That¡¯s a thought.

Back to Gui and Matthew¡¯s place, I helped her making a cake, while Matthew was playing piano in the living room. The soft musical notes filled their apartment with such gentle comfort. At the same time, Mi was uploading amazing new photos from his day. Both Gui and I loved them.

Sitting in the creamy and rich smell of the baked cake, sipping Blue Mountain coffee they brought back from Hawaii, we watched Indochine¡­

Driving home in the misty rain, I counted my blessings. What makes life beautiful are friendships, love, interesting conversations, a movie that moved me, fleeting moments captured on film, a few notes from a piano keyboard in the early evening, the smell of fresh baked cake, and good coffee. I wish the other Jean in her penthouse loft and portfolio of millions could have the same in her universe. As for me, money could wait. Life doesn¡¯t. 🙂

4 thoughts on “A Beautiful Evening”