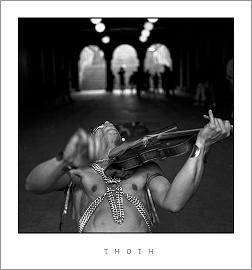 Mi and I first met Thoth a few weeks back in Central Park. He was just setting up shop. A couple of women tourists were talking to him enthusiastically, asking for his autograph, and taking turns posing pictures next to him. A few others were flipping through a scrapbook he placed at the beginning of his line of paraphernalia. I poked my head in and read a few clippings. He called himself Thoth, and he was one of the top 20 famous faces of New York City selected by a well-known magazine. According to those newspaper and magazine clippings, he was quite a celebrity with the media, and a fixture in the Park. Many photographers have taken pictures of him. He displayed them all in the book.

Mi and I were curious to hear his music. We walked around the proximity waiting for the tourists to disperse so Thoth could start his performance. Finally he was left alone. He took his sweet time to prepare himself and the surroundings. Kneeling on the floor the Japanese fashion, he settled on reading a small book. From afar the color theme of the book reminded me of Tibet. His sincerity indicated it was the beginning of his ritual. It was followed by meditation and praying. We were standing around, watching him. He stood up, lighted incense one by one, while walking in some kind of dance steps. Finally he picked up his violin, stood up erect, silently he waved the bow around him, eyes closed, mouthing some soundless phrases as if calling the spirits to gather around.

When the music finally bursting out from the violin, it felt like a joyful eruption of a lively volcano. The music sounded Irish and cultic, he danced while playing, and suddenly his beautiful singing voice joined in. His red silk cape, his extravagant feathered headdress, and now his singing all reminded me of Farinelli. Mi started circling him like a lion circling its prey, taking pictures. That day I was assigned Mi¡¯s Leica M6. So I shoot a few frames as well. The location was a underpass with ruined wall paintings, resembled a ruined temple. The sound affect was lovely. For a few moments, one could be fooled to believe it was a real concert hall from ancient times. And we were privileged to witness a god singing.

When the music stopped, people started walking up dropping their dollar bills in his small bowl. He settled back to his sitting cushion and started making notes on that same small book he was reading at the beginning, completely oblivion of these by-standers coming and going. As I walked up to surrender my dollars, he suddenly turned to me, looked at me straight in the eyes and said, ¡°Thank you!¡± I was so shocked and all I could manage was a smile before fleeting the scene. Later I was a little shamed of myself, when would I ever gain the courage to converse with strangers?

Mi went back in the following two weekends, hoping to find him there. The past Sunday Thoth finally showed up at the right time when the late afternoon sunlight was still beautiful. Among the series, I liked the cover the best. Thoth¡¯s torso formed a human arrow, half guiding half inviting the audience to see the light, to hear the higher being, through Thoth¡¯s body language, through Thoth¡¯s music. The frontal view resembled a face with his breasts as eyes. Shiny metal chains that Thoth wore as decorations resembled a kind of ¡°headdress¡±. It strongly recalled an image impressed upon me during my childhood. It was from an ancient Chinese legend. A general was killed brutally, his fellow general who was also a music lover decided to revenge his friend’s death. During the fight, he lost his head, refusing to fall, his breasts formed eyes, his belly button formed a mouth, his torso became a new head, he continued his battle cry, and he continued to fight.

There is something very similar between Thoth and that Chinese ancient general. And Mi¡¯s photo vividly says it.