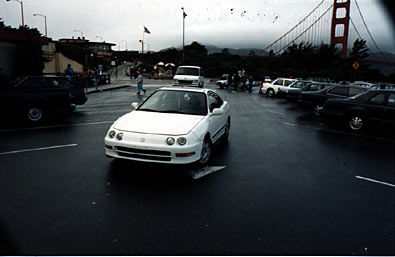 (photo by mfd)
I have an Acura Integra LS ’95. This little white car has been with me for eight years. It is goog-looking, practical (huge trunk space!), loyal and quiet. Never complained when i left him (yes, it is a he) in SFO parking lots week after week, or took him up the mountains to brave the snow storms, playing among those big fellow (sports utilities) like a little kid. I fed him gas weekly, and changed oil roughly once every three months. He never ever threw a temper or went on strike, until recently…

A couple of months ago, one Friday night when I walked out of office finally at midnight, my car won¡¯t start. Lived 25 miles away, Gui and Matthew came to my rescue. With the suggestions given by Bonnie who was still on Yahoo Messenger at the time, the three of us (three engineers at that!) managed to jump start my car after 10 minutes studying each other¡¯s manuals and locating our batteries and performing this task without destroying Gui and Matthew¡¯s good battery. 🙂 I drove home safely. The next morning I drove to the garage and was told that normal Integra battery was supposed to last 50 months max. My poor little car had managed to perform superbly with the same battery for SEVEN YEARS!

I was so indebt to him.

After that, he returned to his daily task at taking me to work and back, out to play on weekends, etc.

Yesterday morning on my way to work, when I got off the highway and stopped at a traffic light, I saw something alarming risen in front of my eyes. A small puff of really light steam hovered above the front of my hood. It was very much like the hot air came out of a car¡¯s tail pipe in winter mornings. Could it be from the car in front of me? I wasn¡¯t sure. I scanned my dashboard carelessly, and out of the corner of my eyes something didn¡¯t seem right. I scanned the needles once more. Gas indicator, low but not in the red, check; engine rev at 0 since I¡¯m idle, check; mileage indicated this tank of gas had run 304miles, normal, check; WAIT! What was that?! The temperature needle was only two scales away from H!! Omygosh! What was going on?! My car overheating?! My car?! The only time I remember experiencing overheating was when Cam and I drove to Yosemite climbing up this 45 degree uphill short cuts, his ancient Honda civic had to pull over cuz the temperature gauge was in RED! Oh shoot! What to do what to do? Should I shut the engine? Now? The traffic light changed and I hadn¡¯t made up my mind so I followed the traffic continued on. The temperature gauge miraculously went down to a quarter! Geez! Driving, good! Stopping, bad! By then I was three blocks away from my office. I prayed all the way and watching the needle oscillating between halfway and dangerously close to high as I alternating between speeding up and slowing down approaching intersections. No red, no red. I murmured as I pulled in our parking lot. My poor little white angel made me proud.

My usual mechanic lived close to my house, which was twenty miles away. Co-worker gave me the number of her mechanic whose garage was a short drive from our office. ¡°He is really good. ¡° She said. I called him up and he patiently explained to me what to do first before taking the car to see him.
¡°Have you checked the coolant level in the radiator? Not the overflow but the radiator itself?¡±
¡°Um, no. Actually, I don¡¯t really know where the radiator is in my car.¡± When it comes to cars, I¡¯m a complete idiot. Shameful but true.
¡°Okay, can you find someone there to help you check? I don¡¯t want you to drive it at all if it is not safe…¡± He was really patient. Based on my limited googling in the morning I knew he was worried about engine damage. ¡°Also, how long has the car been parked? Is it cool enough? The coolant could spray out if the engine is still hot.¡±
¡°It has been three hours¡­¡±
¡°Oh, that should be okay, then.¡±

I walked into the parking lot with Jennie who seemed more confident than me that we would find the radiator. ¡°I know it is in the front, under the hood.¡± She said. I laughed. Whatever is under the hood always seemed like a mysterious maze to me. Half-resembled a monster cyborg drawn by H.G. Giger.

We opened the hood. Immediately she saw the radiator cap on the very front of the car, under the hood. There was a rubber pipe connected that cap with a plastic jar. She jiggled the jar, took off the lid and looked inside. ¡°Hmmm¡­ A pretty big water tank and it is completely empty. That can¡¯t be good.¡± She stated. And off she went back to the building to get some water. I took out my car manual and started reading the section on overheating. What we had found sounded like the reserve tank. The manual stated it was safe to refill it with water if there is no proper coolant mixture available. The radiator would need to be drained later and water replaced with coolant. We filled the water jar half way. I turned on the engine and let it idle for a few minutes, the temperature indicator stayed in the safe zone, about one-quarter.

Thinking mission accomplished, I called the mechanic back and reported what we had found. ¡°But have you checked the radiator itself, does it have any coolant there?¡± We did open the radiator cap but couldn¡¯t see any liquid at the shallow bottom. Okay, by then, some knowledge pieces started to bind together and formed a semi-recognizable shape in my head. I started to understand how the cooling system works. The radiator was like the heating device we had back in China. They were metal pipes going in zipzag fashion to maximize surface area. Water goes through these pipes to release the heat carried by water that had circulated around the engine to cool engine off. So could it be those pipes were completely empty, too? My guilt toward my car started to weight heavier and heavier on my heart. Poor poor thing, he had to labor under such unfair conditions! If it was a child I could be charged with criminal negligence! He has done so much for me, and asked so little in return; yet I had been so ignorant of his needs!

We ended up pouring in three times more water in the radiator than in the reserve tank. By then I felt I was the worst owner of an automobile and should be put on trial. 🙁

During the short drive (approx. 5 minutes local road) to the garage, the temperature indicator stayed in the one-quarter range. I finally met face to face with the owner of that patient voice, Bill. He was in his late thirties, squared face, with a pony-tail. He checked the radiator and gave me a thorough lesson on the modern material of automobile radiator parts¡ªPLASTIC! He shone a flashlight on the visible portion of the thin and long piece, which was dark brown. Pointing out a few thin lighter yellow lines on the plastic, he told me that these lines were the early sign that this plastic piece was about to crack and he suspect there were real cracks deeper in the invisible parts. Very likely my radiator had been leaking for a while. Older cars used to have metal radiators, which could last a lifetime, but not these. I liked the way Bill explained things to me. He wasn¡¯t trying to show off or aimed to impress or to make things sound more complicated and scary. His matter-of-factness put me at ease and his explanations were simple and to the point.

He estimated the cost at $400+. What can I say, it is much cheaper than buying a new car. My little sick angel is in the shop today. Getting a new radiator.

In Chinese we say if you are sick long enough, you’d be as good as a doctor. So far I’ve learned how to jump-start a car and take a gallon of water with me at all times. I wonder what will be next? I promise I would be more mindful of this little machine that I so depend on day-in and day-out.

A car wash this weekend was in order. To thank him saving me from another accident like a knight in shinning armor. 🙂