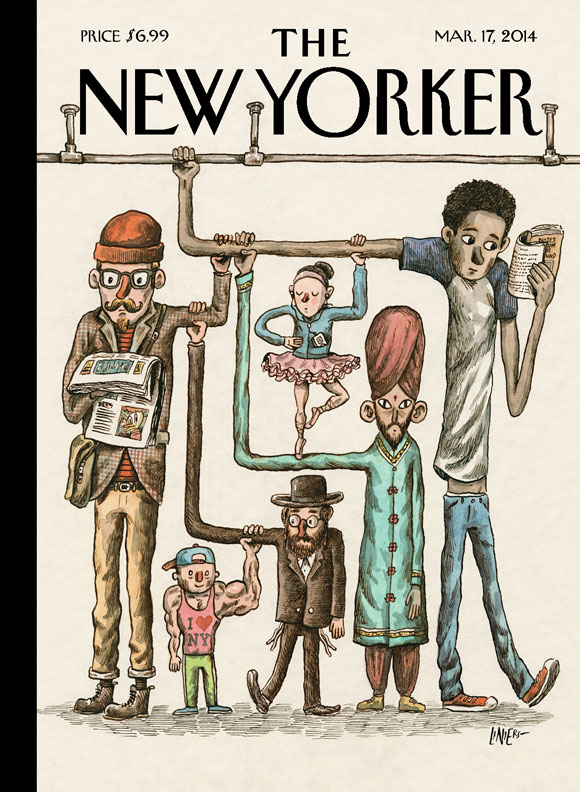 (Noah named everyone in this cover a friend of his at his pre-school class. He named the little boy on the bottom left wearing a “I HEART NY” tank top himself, and little beard dude to his right Daddy).

Long Story Short – Lydia Davis’s concise fiction, by Dana Goodyear
I’ve never heard of Lydia Davis until this article. She won the 2013 Man Booker International prize. She was also Paul Auster’s first wife. She sounds like a very interesting person. I’m not exactly sure i will like her stories, but I’m curious to read them.

The Reckoning – The Sandy Hook killer’s father tells his tory, by Andrew Solomon. Enough said. The only lesson i could draw as a parent from this article is never to keep a child in isolation with his/her parent only. Adolescent might be painful. Isolation is deadly. Children have to learn to adapt to their environment. But then again, in Adam’s case, if his parents had forced him to try harder, it probably wouldn’t have made a difference for Adam himself. Just to force his demon to surface sooner and maybe detected by more people earlier, at least there might be a chance to avert the mass murder at the end.

Heavy Weather – Darren Aronofsky takes on Noah, by Tad Friend.
This is my favorite of the entire issue. I’ve only seen two of Aronofisky’s films (The Wrestler, Black Swan) and didn’t felt too strongly about either. But Noah sounds interesting.

I’m fascinated by this custom-built desk of his.

Aronofsky writes his films on the second floor of his place in Manhattan’s East Village, at a custom-built desk of Bastogne walnut, inlaid with responsibly harvested macassar ebony and pink ivory. Twenty-five puzzles are concealed within it, cunning locks and springs and slides, and the front houses an octave of organ pipes you can play by sliding drawers in and out. As you solve the puzzles, you find hidden pieces of wood, each of which displays a few musical notes. When you put the pieces in order and play the resulting tune on the organ –an Irving Berlin song that was the first thing Aronofsky learned on the piano–it opens a secret safe: the final prize. It took him six weeks to pop the safe, and he had the plans. David Blaine told me, “The desk is a very cool thing that’s a lot like Darren himself–there’s always another twist and turn.”

In the mid-nineties, Arnofsky wrote down ten film ideas he wanted to pursue. All six of his films have come from that list, and all have been informed by his early years: the stress and the bloody toes his sister incurred in ballet practice became Nina’s in “Black Swan”; his parents’ cancer scares informed Izzi’s cancer in “The FOuntain.” After he wrote a prose poem about Noah for his seventh-grade English teacher, Vera Fried, he got to read it over the P.A. system — “The rain continued through the night and the cries of screaming men filled the air” — and was transformed from a math geek into a writer.

Then there is the celebrity gossip that i didn’t know before. Aronofsky was engaged with Rachel Weisz for five years and had a son together. Then they broke off the engagement, Rachel started seeing Daniel Craig, whom she later married.