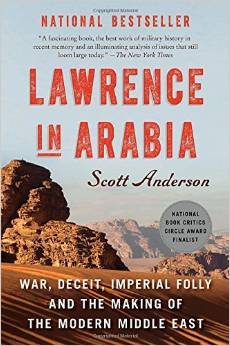 I started reading Sunday evening and could not put it down. Entire week, I’ve devoted all my spare time to it.

I just finished it this morning on my shuttle to work.

The entire book was a rather delightful experience, but my tears rushed out so suddenly at the end, I couldn’t do much but sit in the lovely winter sunshine by the shuttle window  and cried for a while.

Churchill’s eulogy was rather more loquacious: “I deem him one of the greatest beings alive in our time. I do not see his like elsewhere. I fear whatever our need we shall never see his like again.”

After i watched “Lawrence of Arabia” for the first time, I tried to get my hands on more background stories about T. E. Lawrence. I remembered trying to fight my way through the Seven Pillars of Wisdom for probably half a year but eventually gave up (probably 30% into the book?).

Scott Anderson’s “Lawrence in Arabia” is exactly the book i’ve been looking for all these years.  In addition to Lawrence, he also included a German spy, an American Oil man, and a Romania Jew who settled in Jerusalem during Ottoman’s rule and eventually played a big role in the formation of Israel.  All four of them were in their late 20’s or early 30’s. None of them had formal military training, yet they all contributed greatly to the event in Middle East during and after WWI.

The book illustrated the relationships among the empires and their people. Andersen is a great story teller and a wonderful historian who explained the intricate relationships so clearly.  He was also funny.

Suez operation had seemed to underscore the old maxim that war can kill all things except bad ideas.

“He was establishing a tradition of fundamentally misreading the situation in the Middle East that his successors in the American intelligence community would rigorously maintain for the next 95 years.”

On the incompetence of British military during WWI:

after all, repeatedly smashing up against the enemy’s strongest points had bcome something of a British World War I tradition by now

On the tragedy created by WWI and its aftermath:

…it’s hard to imagine that any of this could possibly have produced a sadder history than what has actually transpired over the past century, a catalog of war, religious strife, and brutal dictatorships that has haunted not just the Middle East but the entire world.

…four wars between the Arabs and Israelis; a ten-year civil war in Lebanon and a twenty-year one in Yemen; the slaughter of ethnic minorities in Syria and Iraq; four decades of state-sponsored terrorism; convulsions of religious extremism; four major American military interventions and a host of smaller ones; and for the Arab people, until very recently, a virtually unbroken string of cruel and/or kleptocratic dictatorships stretching from Tunisia to Iraq that left the great majority improverished and disenfranchised.

On why Lawrence rejected his former life so absolutely after the war:

As a boy, he had been obsessed with the tales of King Arthur’s court and the chivalric code, had dreamed of leading a heroic life. In the reality of war, however, Lawrence had seen men blown to bits, often by his own handiwork, and left wounded behind to die, and had ordered prisoners to be killed. Just as any thoughtful person before or after him, what Lawrence had discovered on the battlefield was that while moments of heroism might certainly occur, the cumulative experience of war, its day-in, day-out brutalization, was utterly antithetical to the notion of leading a heroic life.

Some of Lawrence’s writing that Anderson quoted were truly lovely. Maybe it is time for me to pick up “Seven Pillars” and give it another try.

I loved you, so I drew these tides of men into my hands
And wrote my will across the sky in stars
To earn you Freedom, the seven pillared worthy house,
That your eyes might be shining for me
when we came.
Death seemed my servant on the road, till we were near
And saw you waiting
When you smiled, and in sorrowful envy he outran me
And took you apart:
into his quietness.

…two months into his retirement, “at present the feeling is mere bewilderment. I imagine leaves must feel like this after they have fallen from their tree and until they die.”

In one of his interview, Anderson said that even though “Lawrence of Arabia” the movie got many facts wrong, but it managed to tell a bigger truth when it comes to Lawrence as a person. I couldn’t agree more. The movie and this book seem to be a great complement of each other. I love both.