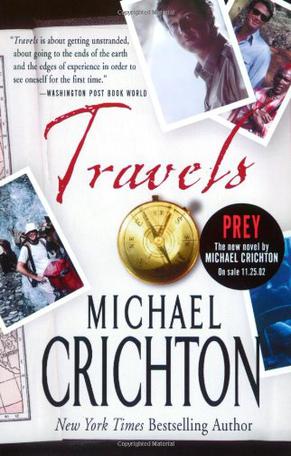 I first read Michael Crichton’s “Travels” shortly after college graduation. His adventurous travel held a strong appeal to me: climbing of Mt. Kilimanjaro, night diving, wreck diving, diving with sharks, living with the natives, safari in Africa, etc. For many years, this remained one of my favorite books.

Gui mentioned this book to me this weekend when we were discussing the medical profession. “Michael Crichton talked about his medical school days in his ‘Travels’.” I totally forgot about that part of the book!

I reread it again during the last couple of days. Crichton didn’t just go to any medical school. He graduated from Harvard Medical School! What’s more, he actually went to Harvard wanting to be a writer but kept on getting C for his writing. This episode was hilarious.

I had gone to college planning to become a writer, but early on a scientific tendency appeared. In the English department at Harvard, my writing style was severely criticized and I was receiving grades of C or C+ on my papers. At eighteen, I was vain about my writing and felt it was Harvard, and not I, that was in error, so I decided to make an experiment. The next assignment was a paper on Gulliver’s Travels, and I remembered an essay by George Orwell that might fit. With some hesitation, I retyped Orwell’s essay and submitted it as my own. I hesitated because if I were caught for plagiarism I would be expelled; but I was pretty sure that my instructor was not only wrong about writing styles, but poorly read as well. In any case, George Orwell got a B- at Harvard, which convinced me that the English department was too difficult for me.

So Crichton switched to pre-med instead and got in Harvard Medical school. He was writing thrillers to pay for med school. One of his earlier books got bought by Hollywood while he was doing clinical rotations in hospitals and he decided to quit Medicine and moved to Hollywood after graduating from Medical school.

The Medical School years weren’t the only ones i forgot that was in the book. Almost more than half of the book was on his experience with psychic and paranormal phenomenons, which I had also erased from my memory, i suspect i might not even bother to read most of those stories during the initial read.

It is interesting to re-read this book i used to love so much. I appreciate the medical school stories a lot more than before. The adventurous travel stories were still interesting, but less thrilling than when i first graduated. I could also sympathize with his psychic experience a bit more and less skeptical about them than before.