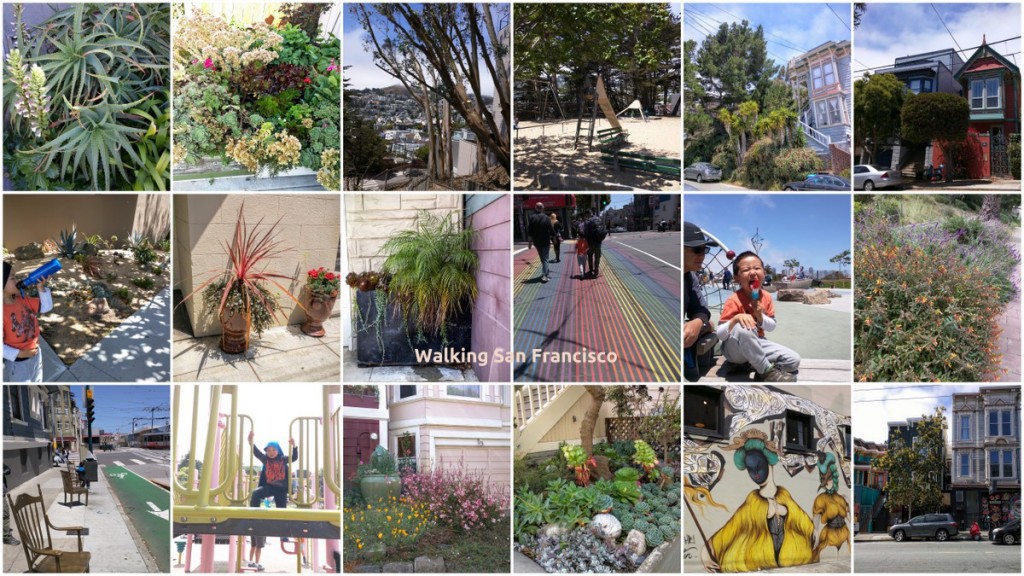 Usually on weekends we drove Noah to various places to keep him entertained: a few city playgrounds that we alternate, California Academy of Science, Exploratorium, Discovery Museum, SF Zoo, Lands End, Ocean beach, Fort Funston, Aquatic Park, etc.. Sometimes we took the MUNI if we have a prescribed routes with specific destination(s) in mind.

On Saturday, i suggested Randall Museum which Noah and ZM have been once but i have not. Noah loved the train set there. We thought we would drive since last time they went by MUNI and noticed there was a parking lot and not full. But right before we headed out, we decided to stick to MUNI because it was such a nice day and all of us wanted some exercise.

The climb to the Museum was steep, but it was a pleasant walk. I just became interested in succulents lately and started taking notice of various front door gardens along San Francisco streets. The weather was so beautiful, too. Sunny but not too hot. Breezy but not too cold. Unfortunately by the time we climbed up the steep hill, we were greeted by a “closed for renovation sign”. No train set no museum. We admired the gorgeous view from the picnic area around the museum, then went downhill to the little playground, where Noah seemed to really enjoy those old fashioned play structures that have become increasingly rare in the City.

It was obvious that Noah has more energy left unspent, so we thought we could stop by Dolores Park playground to keep him going. As i was checking for directions on Google Map I found out it was only 16 minutes away on foot, 13 minutes if we wanted to take a bus. As I mentioned this option to ZM, he immediately decided it was best if we walked there. so off we went.

What a great walk it was! We took a little staircase from the bottom of the Randall hill to Douglass Street and walked to 18th, then it was a straight shoot from there. We promised Noah with the Bi-rate icecream as we made the long walk. He took a couple of breaks sitting on the sidewalk. I didn’t mind at all, enjoying the sunshine and the various lovely front door gardens along the way. Noah also had his first encounter with a naked man sunning himself on the sidewalk in front of a cafe on the 18th. I was a little nervous that Noah might stare. We walked past him as nonchalant as i could muster. Noah didn’t stare, he walked with me as if nothing happened. I was very relieved. Half block down, he turned to me and said, “That person didn’t wear any cloths. But he wrapped his peepee to prevent leaking, right?” I was dumbfounded. So he did notice, but it took him half a block to work out a reason. I thought his explanation was better than any i could come up with. So i nodded yes, probably.

Miraculous, there was no line at bi-rate!

We picked up a Gyro on Castro, so sitting on the wooden bench outside of Bi-Rate, the three of us shared the giant Gyro, and two icecream cones. Fed and sugar high, we walked the two blocks north along Dolores to the playground.

J train was right by this playground, so we headed home around 2:30pm. Noah was still energetic enough that he didn’t fall asleep on the train.

We all loved this walk so much that we did it again on Sunday afternoon after Noah’s swimming class and lunch at home.

This time we took J to Duboce Park around 2pm, checked out the playgrounds there, then walked to Lower Haight. At Duboce park, i took notice of the sign atop of the N train station right by the playground, “EAST PORTAL”. It took me a little while to realize the symmetry with “West Portal”, which was a well known neighborhood in the south side of the city. It was where the light rail trains enter a tunnel. So the exit of the tunnel is here in “East Portal!” and interesting that this neighborhood end up being called Duboce instead of East Portal. ha.

None of us had walked the lower Haight before, so we really enjoyed the change of scenes. Originally i thought we could end up in Hayes valley, checking out the Octavia playground, but I over-estimated Noah’s energy level in the afternoon. Luckily that the walk from Duboce to Van Ness were all Downhill. We ended up having three-twins icecream on Fillmore, then took bus 49 on Van Ness and headed home. This time, Noah fell asleep almost instantly on the bus and slept the full 20 minutes.

Noah also seemed to prefer these walking/Muni trips over driving. I think it is because we interacted a lot more during the trip than if we were driving. Driving really projected a false sense of intimacy, especially for young children who prefer physical interactions over a conversations. Physically we were isolated in our own little spaces even though we were physically not too far inside the car. But walking and Muni rides means i was holding his hand all the time, he could sit on me, dragging me around, pulling my hair, kissing me or hugging me, or talk to me face to face.

I need to pick out more routes for the coming weekends. getting to know more neighborhoods, stores, gardens, playgrounds, and buses. Best of all, to see what other explanation that Noah will come up for this bizarre and beautiful city of ours.