A very geeky little verse that I forgot to blog.
From mezzoblue, via zeldman: 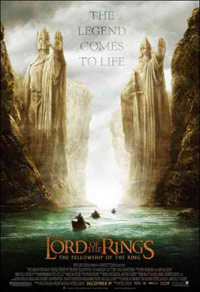 haha! I know I know, you have to be a real geek to apprieciate this one! 🙂

Among my Christmas gifts, there was a set of Extended Edition DVD for Lord of the Rings – Fellowship of the Ring. Two discs worth of a newly cut movie that contains 30 minutes extra footage that didn’t make it into the theatrical edition. The movie’s composer Howard Shore had to compose new music to go with this “newer” and “longer” version. Then there are two discs, six hours worth of extra materials that covered the making of Fellowship of the Ring. Absolutely fascinating! Mi and I spent 3 nights watching all 4 discs. My co-worker expressed amazement that I’ve seen all four discs. I told him that I wished I could’ve spent more time with that world. Ah, the power of fantasy!

Here is a good review on this DVD set: Review with Large Images, from dvd.ign.com.

Originally I wanted to get some original conceptual drawings (THEY ARE SO BEAUTIFUL! Lyrical!) to show you. Trying to read one of the disc for its “2000 images”, spent 2 hours fighting with its stupid InterActual Player. It crashed my laptop N times and then continued giving me “video subsystem” errors! Fuming. According to InterActual’s website, it doesn’t work with XP! WHAT THE @($&#&$*#%^*#&%(#*&$#*@*##@*)@!

So you have to wait till i can get to those images from some other meanings. However, Alan Lee was one of the most famouse illustrator for Tolkien’s work. You can get some idea of his drawings here.

Any Lord of the Rings fan that’s worth his salt should own these “Special Extended DVD” sets. I’m going to buy the Two Tower set and will be waiting for Return of the King…

One thought on “More on LORD OF THE RINGS”