Went camping in a Redwood grove at Memorial Park of San Mateo (near Pescadero) with Noah’s 1st grade cohorts. Everyone had a blast. San Francisco Bay Area has so many amazing nature resources that are so close to us. I kept on forgetting. 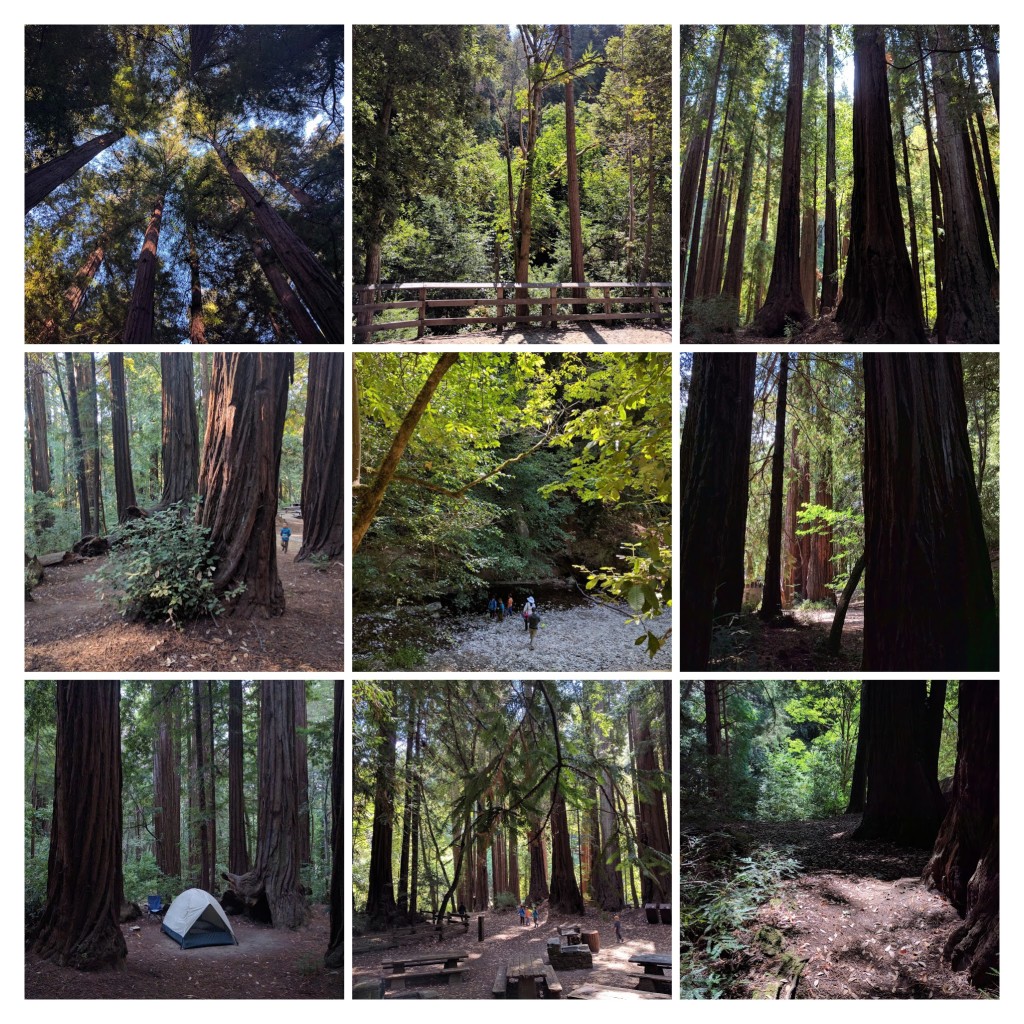 Digging through our old camping albums, i came cross a trip i did with Gui and Matthew almost exactly 15 years ago today. It was such a wonderful trip! And boy I couldn’t believe this was my writing!

“The Salinas Valley is … a long narrow swale between two ranges of mountains.
I remember that the Gabilan Mountains to the east of the valley were light gay mountains full of sun and loveliness and a kind of invitation,
so that you wanted to climb into their warm foothills almost as you want to climb into the lap of a beloved mother.
They were beckoning mountains with a brown grass love.
The Santa Lucias stood up against the sky to the west and kept the valley from the open sea,
and they were dark and brooding –unfriendly and dangerous.”
– John Steinbeck, East of Eden (1952)

Santa Lucias – Big Sur and Nacimiento Road, Sep. 1, 2001
So we visited Steinbeck Country. Starting from the formidable Big Sur to the west, we rested in the redwood forest of Pfeiffer State Park, admired McWay Falls plunged onto a secluded beach at Julia Pfeiffer Burns State Park, drove over Santa Lucias via the incredible Nacimiento Road while a sea of fog lingered beneath us; Santa Lucias looked golden and seductive under the setting sun. If Steinbeck had seen what we have seen, would he have had a different opinion about this mountain range? Eventually, we descended onto Salinas Valley as a red moon rose over the peaceful land of oaks.

Salinas Valley – Pinnacles and Fremont Peak, Sep. 2, 2001
We woke up in Soledad, a sleepy farming town with unusually wide streets. Everywhere we looked, vineyards were extending to the foothills of mountain ranges on both sides of the valley. Driving toward Pinnacles, we passed two Mexican Cow Boys by the field. They waved at us and bowed slightly, sitting high on their handsome horses.
Hiking on the sun-baked Balconies Trail, and climbing Chokestone Dome helped us to return to the time and space we were familiar with. However, once we left the park, the Chalone Winery amist more vineyards on the gentle rolling hills slowly but surely transferred us back to Steinbeck’s time, Steinbeck’s country. The gracious host, Mr. Dale, who greeted us at the tasting room was as wise as Adam’s housekeeper/friend/cook/philosopher Lee from East of Eden. When we asked whether the towns we have passed – Greenfield and Soledad – had seen better days. He laughed, “It is the better days!”
Still dazed and deliciously drunk from the aroma of the lovely Salinas Valley, we stood on Fremont Peak at San Juan Bautista, watched the Gabilan Mountains turned golden then red in the setting sun and the day slid to a comfortable darkness…