A few months ago, Noah’s homework packet came back with a slip that says, this semester, Noah’s classroom has 5 hermit crabs that students can adopt at the end of school year, since there were 5 crabs, and 21 kids in the room, there will be a lottery. If parents are okay with their child participating in the lottery, sign here.
So we signed the paper, half hoping Noah wont’ be so lucky.

Lo and behold, a week before school ended, Noah came back all excited saying he would get a hermit crab to take home!  That was a Friday, we had one weekend to prepare since the crab would come back on Monday!

I started researching what we needed to buy, what Yangmama has that we could use. Initially i thought we will just go to the pet store and buy a set.  Then came the surprise. Apparently everything the pet store sells for a hermit crab was the wrong thing:

Molting is the most fascinating thing about hermit crabs. They bury themselves (crab and shell together) under the sand, then they shed their outer shell and skin. This is a time of renewal. Any limb that was missing prior to the molt will regrew itself during this time (even eyes can regrow!). While they live deep in their sand tunnel waiting for their new skin/shell to grow back and harden, they ate the old shell for nutrition and energy. Molting could last a few weeks to a few months!! Depends on the size of the crab.
Because of all these mistakes that pet store marketing to the buyers, most hermit crabs die after one year or less. mostly because they couldn’t molt.  While with correct condition they could live up to 15, even 30 years!
Among the five crabs from Noah’s classroom, two were giant ones, three were small. Noah ended up with largest of the 5. 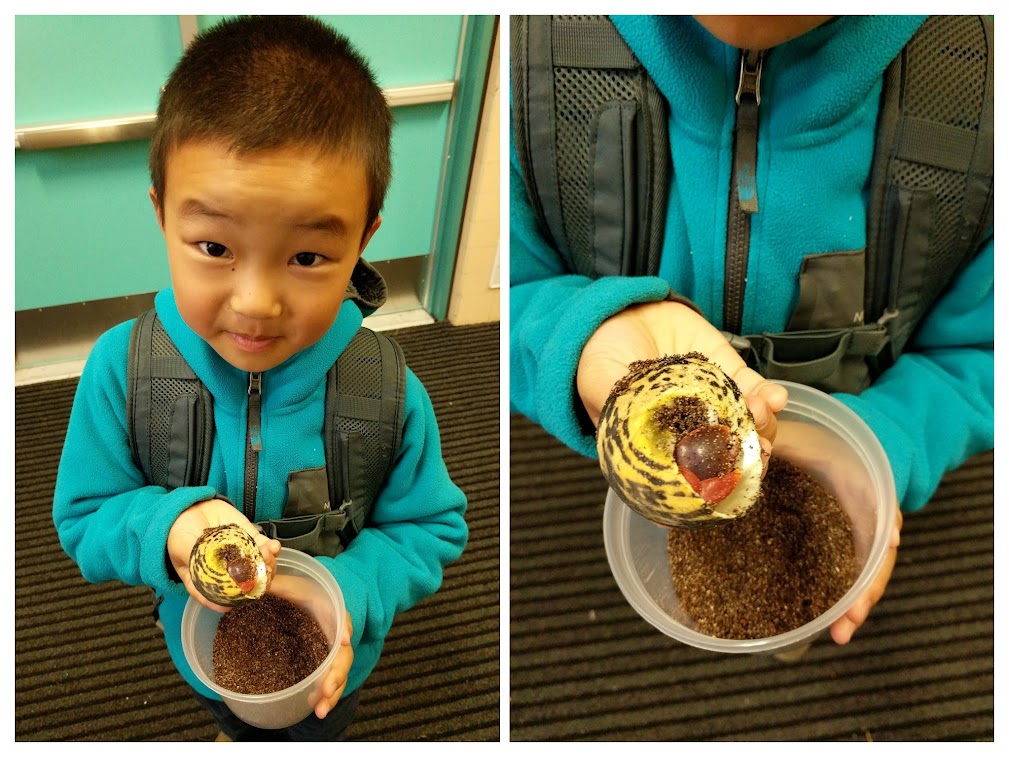 By Monday we setup the tank based on the initial research i had done. 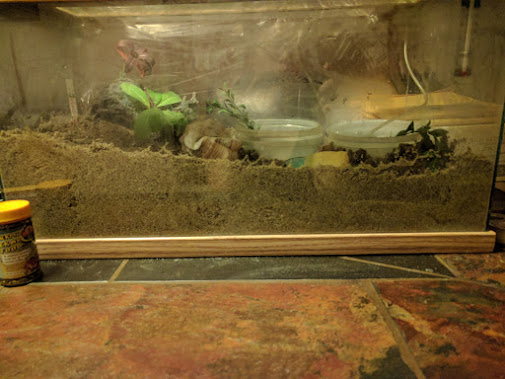 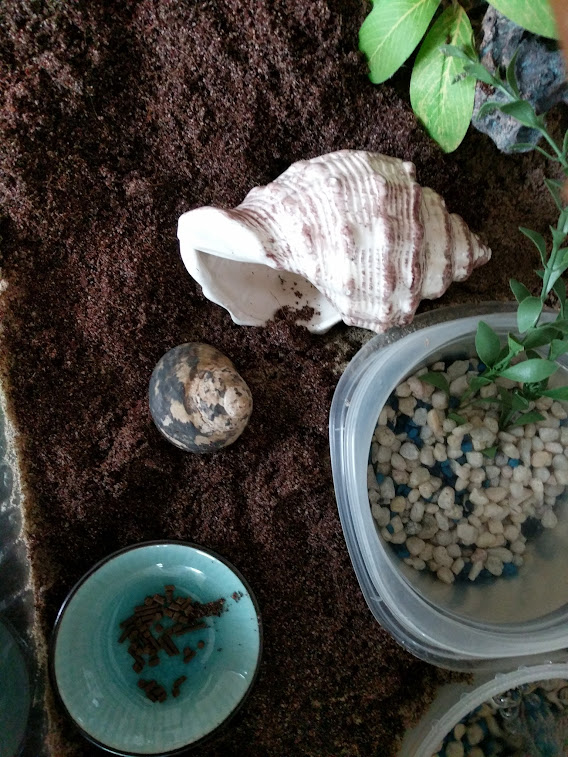 Once the crab is in the tank, we had more problems to solve.

First the salt water pool and fresh water pool’s edge were too high above the sand surface, and the tapperware wall was too slippery, Crab couldn’t climb in, and once its in, it might not be able to get out. 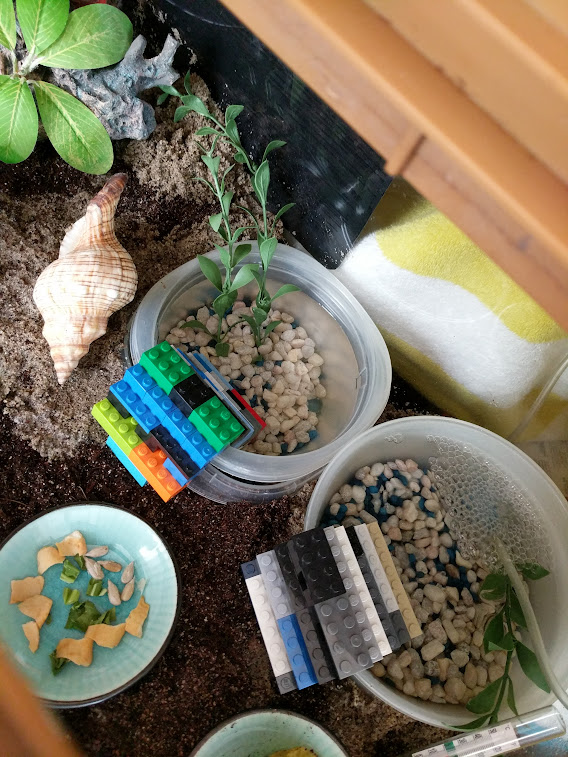 San Francisco was in a heat wave during the couple of weeks prior to the crab’s arrival. But the heat wave ended right after the crab came home.No matter how we try the humidity couldn’t reach the 80% required. The temperature is also too low (ideally 80F or warmer).
Mi made another trip back to my Mom’s on Tuesday to pick up the heat lamp and an extra cover. bought a heatpad from the pet store, correct chemical to condition the tab water. I ordered a digital Thermometer-Hygrometer.
Initially i had a bubbler running to increase the humidity. But both Noah and Mi thought it was too loud, crab didn’t like it.  Maybe it was the loud bubbler, maybe it was the new environment, maybe it was because the crab had been in pet-store like condition for so long (even in the classroom setup, the sand was only a thin layer) that it was dying to molt, by Tuesday evening, the crab had disappeared. Buried itself in the sand completely, with its giant shell.

By Wednesday, all was well, we had both heatlamp and the heatpad running. the digital thermometer-hygrometer is more accurate. turned out our temperature and humidity were both okay. humidity above 80%, temperature above 80F. the previous analog thermometer and hygrometer weren’t accurate. whew. 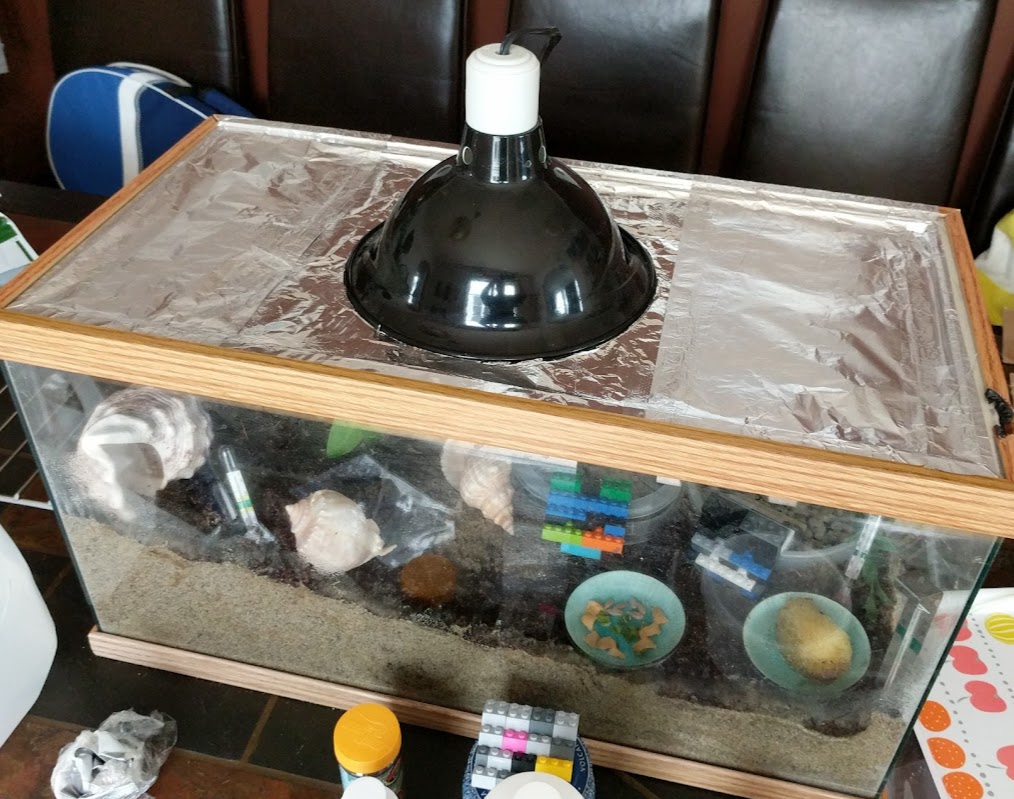 According to the internet, hermit crab bury itself in the sand, sometimes to de-stress (especially after coming to a brand new environment), sometimes to molt.  If the former they will re-surface after a few days. Molting could take much longer.
The day when the crab came home was 5/22. It buried itself on 5/23.  It didn’t come up after one week, i thought, okay, it is molting. three weeks later, still no sign.  Mi started saying it must be dead by then. But we couldn’t dig it out. Since a molting crab is very vulnerable. digging it out will mean certain death.  After a month, i started to wonder whether it would ever come back up.
Noah completely bought into my molting theory. Every time when Mi hinted the crab might be dead, Noah would protest, “It is molting!” 它在换皮！and he still asks me from time to time when should we transfer the tank to Grandma’s place since we won’t be around during our vacation, and someone has to look after it.

Today is 6/29, almost 5 weeks after it has buried itself.  I checked the temperature and humidity this morning, it was around 76F and 77%. i turned up the heatlamp temperature a little bit. and went to work.

Mid-morning, Mi sent me a message, “I see sands all over the legos and the sea sponge dish, could it be alive?!”

OMG! It is alive! after five weeks buried in sand! (the red part is its claw) 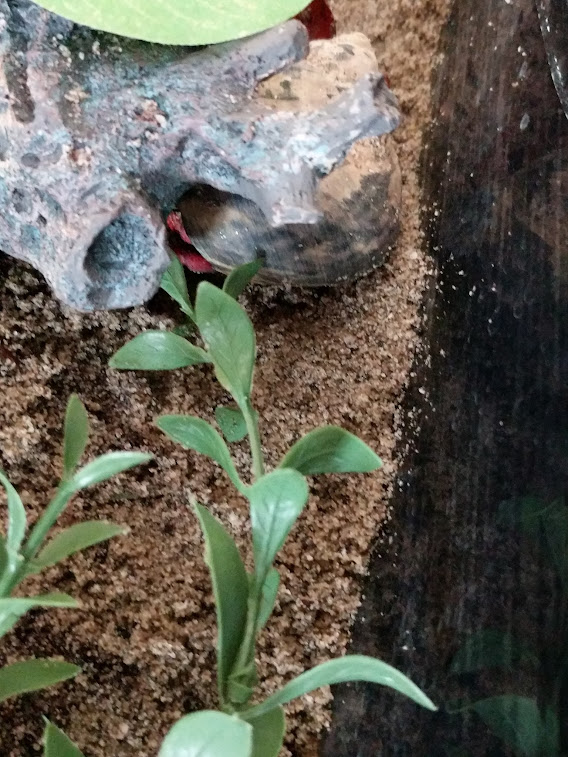 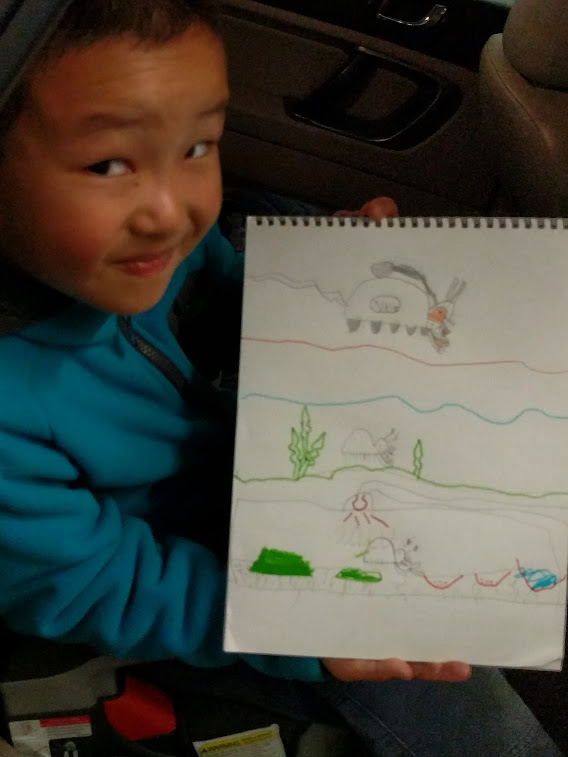 P.S. Last night as i was writing this post, Noah came by and saw the title, “Noah’s Hermit Crab?!” He demanded that I read the whole thing to him. Afterwards, he drew another picture.