It all started when my sister bought my mom a Phalaenopsis for her birthday in the winter of 2002. Mom has always been an accomplished gardener but she has always claimed that she could only grow the hardy kind of plants. The “fussy” image of orchid intimidated her, let alone the usually high price tag comes with it. But this particular Phalaenopsis changed everything. Its lovely bloom lasted for almost 8 months without making a fuzz. It seemed easier to take care of than some of her African violet. Encouraged by this initiation, mom went on and bought a couple of “Dancing Dolls” (Oncidium) that she had been eyeing, and up till then she had refused that temptation. After the original Phalaenopsis stopped blooming, mom repotted it and waited and waited. Earlier this year, it rebloomed with three (instead of the original one) flower stems! It was the only confirmation that mom needed. She was now, an official orchid grower.

Then, suddenly everyone around me started collecting orchid. Even the weekly fresh cut-flowers displayed in our office lobby have been changed to a large basket of elegant orchid. They were sold everywhere, from 3 for $10 bargains at Saturday’s farmer’s market, to $20 at Trader Joe’s, to $40+ at high end yuppie grocery stores.

We exchange tips with each other:
“Place it next to a sunny window, but keep the curtain down at all time to avoid direct sunlight.”
“After the flowers are gone, put it outside so the plant gets the variation of temperature from day to night. Otherwise, it won’t bloom again.”
“Don’t water it too much. Rotten root is much harder to fix than dry ones.”

I wonder if the movie Adaptation had anything to do with this sudden obsession with orchid.

I got my first orchid at $14.99 from, among all places, Costco! 🙂 It has been two months, and it is still blooming. The weekend immediately following my purchase happened to be the hottest weekend in the City and the temperature climbed to 90F. The orchid lost three buds during that heat wave, and worried me sick. I thought it would be the end of my orchid experiment. But i got lucky. The orchid recovered and started developing a new flower stem!!! I’m keeping my fingers crossed. It is still a tiny development so far…

I water all of my plants on Saturday morning. In ZM¡¯s words, it is my ¡°flower time.¡± The orchids are the most time-demanding plants. I have four of them. Each of them remained in the state when I bought them from the shop. Two of them were blooming and continue to bloom; two of them weren¡¯t and they still aren¡¯t.

Based on my mom¡¯s advice, I put the orchid pot in a larger container pot (no holes), water it once, and make sure the water covered all surface of its ¡°soil.¡± Since their ¡°soil¡± is made of largely soft wood, which doesn¡¯t retain much water. Excessive water almost comes out immediately from the bottom of the pot. I let it drain, then took the excessive water from the container pot and reapply them onto the top of the orchid pot. Repeat for a couple of more times. The idea was to really soak every single piece of ¡°soil.¡± It is tedious work. I only have two container pots, so the orchids took their turns to get watered. When waiting for the water to drain, I often thought maybe this is how a boy would feel if he had a high-maintenance girlfriend. One has to be so careful and couldn¡¯t help wondering continuously if she is happy, if he has done something wrong or missed some hint of displeasure. 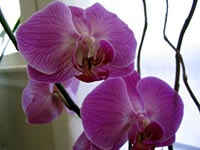 A friend once told me his strategy with orchids. He would buy a blooming one, and enjoy its loveliness. Once the flower wilted, he took it right back to the nursery and let the professionals nurture it back to bloom. Then he would buy another blooming orchid. ¡°There is no point to keep them since they will for sure die on me.¡± I guess it goes with yuppies¡¯ preference of licensing expensive vehicles.

Maybe I¡¯m not that much different. I keep the flower as long as it looks healthy. Once the first hint of trouble emerged, I also took it straight back to my personal nursery ¨C Mom¡¯s! 🙂

Mom and I bought my second batch in SF’s farmer’s market. 3 for $10! What a bargain. The catch was none of them were in bloom. I took two and mom took one home. The two i had never seemed very happy. But the one mom took with her has grown THREE flower stems!! I start to suspect that mom is emitting a special EM wave that orchids love! 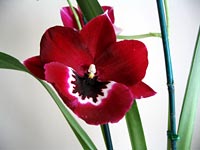 My last purchase was also from farmer’s market. For $5 the seller stood by his truck, and showed me three pots of mini-orchid in the exact color i explained i liked – velvety red-wine. I didn’t get to hold it till i’ve paid. As i held it in my arms walking to my car, a little breeze sent a lovely fragrance to my nostrils. I looked down to this tiny plant with its humble origin, incredulously, Wow! It is fragrant! After it has settled in my apartment, I realized that its fragrance actually changes depends on the weather and time of the day. On a sunny and morning, its fragrance is the most potent. If I left the french doors open, the breeze tends to fill the entire apartment with this orchid’s lovely scent.

The official names of these orchid:
The costco one: a rather typical Phalaenopsis.
The fragrant farmer’s market one is a Miltonia, and it actually comes with a very detailed label: a cross between Miltonia Woodlands “Epony” and Miltonia Pearl Ono “Red”.

Came across this conversation as I was browsing orchid newsgroup.
“I heard Orchid is very fussy and hard to take care of…”
“Actually, orchid is mostly consistent and fool-hearted. It is usually the people who raise orchid that are fussy.”

Good orchid sites I found so far:
1. Orchid Central, good information on which orchid likes outdoor sun, outdoor shade, and indoors. Lots of really good photos of her(i’m guessing it is a she) orchid. Best of all, she lives close to Pacific Coast, so she should have similar climate like ours.
2. Orchid Lady, simple care instructions, categorized in terms of Water, Light, Temperature, etc.
3. First Rays Orchid, good explaination to help identify orchid, with illustrations, too!