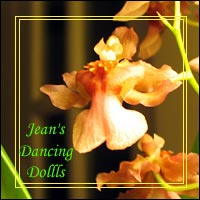 In the fuzzy state between dream and awaking, I saw sunshine. The glorious morning sunshine, like it used to do in the winter month and the spring, bathed our little kitchen and those delicate blooms of the mini ¡°dancing dolls¡± orchid by the kitchen window. Oh, the Joy! Then I opened my eyes to another gray fog laden morning of San Francisco¡¯s notorious summer. Urghhhhh!

I¡¯ve been doing some fanatic researching on-line, after I got my forth orchid on Saturday. It is a miniature ¡°dancing dolls¡± with hundred pinkish flowers dotted on its less than 2 feet tall torso. I liked it because of its ¡°chocolate¡± fragrance. It came from the same vendor from whom I bought that fragrant Miltonia in Saturday¡¯s farmer¡¯s market. I found out its official name, it is either a Oncidium Sharry Baby ¡°Sweet Fragrance¡±, or a Sharry Baby “Taida”

Supposedly it is an easy-going orchid. It blooms multiple times a year and even spun multiple blooms out of one psedu-bulb, too! Unlike the Miltonia I had since early June, Sharry Baby likes its feet dried quickly. And it needs sunshine, lots of it. But sunshine is what we don¡¯t have anymore. I haven¡¯t seen a speck of it since Saturday afternoon around our apartment! 🙁

Turned on the coffee maker to make our morning coffee, I walked around with Mi¡¯s new light meter, measuring light intensity throughout our apartment. Looks like our semi-enclosed South-West facing balcony provides as much light as our South-East facing kitchen window, on this foggy morning at least. I moved the phal with two new flower stem growth from the middle of the room to the balcony door, doubled the light intensity for it; sprayed the Miltonia; and refilled everyone¡¯s humidity tray. 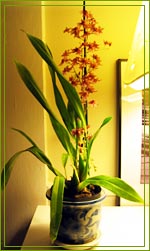 The images of orchid lovers¡¯ apartment hunt me. It resembled an alien invasion. From those pictures I found on-line last night, every visible spot was covered by pots of orchids. Most of them were not in bloom. Even when they were, standing in an army of blooming orchid, one couldn¡¯t really appreciate each individual orchid¡¯s beauty anymore. Not to mention those tangled wires for lights, humidifiers, and fans hung above the ¡°forest¡± of orchids in people¡¯s apartment and/or basement. It resembled some kind of illegal operation, like a closet marijuana grower¡¯ closets. Addiction is scary.

I shudder, hoping it would never happen to me. I told Mi last night that he should smack me on the head if I started approaching that state. He laughed, ¡°I think that moment has arrived.¡± Right now I have four orchids in the apartment. Comparing to the rest of my plants, they are the minority still. I was planning of getting maybe a couple of more. But it is still a far cry from the enthusiastic people I¡¯ve seen on those orchid forums. I better watch out though. One posting I read yesterday was directed at a beginner, ¡°Be aware, it wouldn¡¯t take long to go from 3 to 30¡­¡±

Am I addicted? Dreaming of sunshine out of wariness for my ¡°dancing dolls¡±?

One thought on “Let There Be Light!”