If you are like me, you would have heard of the phrase â€œManolo Blahnikâ€ for the first time from Sex and the City.

When Carrie Bradshaw, the shoe-loving central character of the HBO TV series Sex And The City, took a wrong turn after lunch in SoHo she found herself on one of New Yorkâ€™s grungier side streets and face-to-face with a mugger. â€œPlease sir,â€ she pleaded. â€œYou can take my Fendi baguette, you can take my ring and my watch, but donâ€™t take my Manolo Blahniks.â€ Unfortunately for Carrie, the mugger did just that and ran off with her favourite pair of strappy sandals.
– Manolo Blahnik/Show Designer

Later Carrie calculated her annual shoe spending and came to the realization that the amount of money she spent on shoes would have been enough for a downpayment in NYC.

But i never bothered to look them up when i do go shopping. Partly because I, again, forget the spelling of the last name.

Then when we were in Vegas, we saw these $3500 Manolos. I was amuzed but hardly impressed. Another marketing scheme aimed for those brand-name-crazed women, I thought. Shrugged it off.

Low and behold, Gui sent me this link from National Geographic today, and I was hooked.

Politically correct or not, there is an irresistible urge to pet this shoe; put it on a leash; take it to bed. It is a Manolo Blahnik high heel, and for more than 30 years, Blahnik has designed shoes that are the accessory to a fairy tale: Shoes made of rhinestones, feathers, sequins, buttons, bows, beads, grommets, rings, chains, ribbons, silk brocade, bits of coral, lace, fur (from farm-raised animals, he adds), alligator, ostrichâ€”everything, perhaps, but woven unicorn forelock.

I got curious and started doing a little research. Next thing i knew, I fell in love with Manolo Blahnikâ€™s original sketch of his shoes. Stilletos are not my thing. I know I would never ever wear a pair of Manolo. But looking at the illustration he did for his creation, how could anyone not feel attracted to them? They are, truely, modern art. 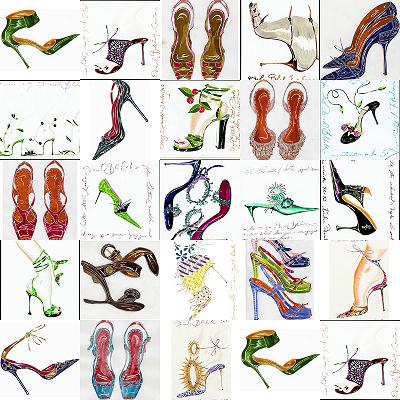 I even start to understand why Madona has compared Manolo Blahnik’s shoes to sex. Take a look at this, doesn’t it look sensual to you? 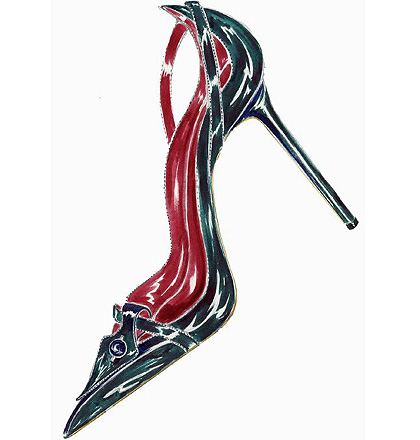 Here are some of these illustrations I could find from the internet.

Even better, there is already a collection of all of his drawings up to 2003 in a book!
manolo blahnik drawings.

One thought on “Manolo Blahnik”