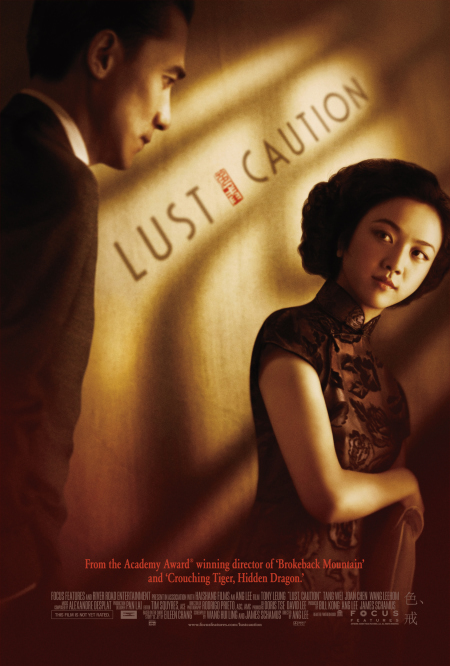 When I just started rock climbing outdoors, once at Castle Rock, my belay partner commented on the way i was climbing, “Quiet Desperation.” It still makes me laugh when i think of it now. If you have ever hung on to a tiny hold on a rock surface, your hands started sweating, and the ledge under your tip-toe started to become sharper and sharper, but you couldn’t find the next hold, you would understand how that feels like. Even though I can’t generalize how all climbers behave during a climb. But i would imagine many are like me, quiet desperation. Because usually the place you go to climb is really really quiet besides the breeze, rattle of leaves and occasional bird chirping. Just you and the rock, and the frustration or exhilaration that’s boiling inside you. It didn’t seem to go with the environment other than a quiet endurance.

The much commented on sex scenes in Ang Lee’s new movie felt very much like that: Quiet Desperation.

Otherwise, exquisite is the right word to describe the movie. From the set, the period architecture, street scenes, interior furniture, clothing, down to the lipstick print on a coffee cup or a wine glass. Flawless design. Ang Lee’s wish to reproduce Shanghai in 1930’s seemed to have been fulfilled.

The dialog is sparse. I have to agree with some of the critics out there that taking out the intense sex scenes, it does feel like a Kar Wai Wong movie, it reminded me of In the Mood for Love as well as the first two thirds of 2046. Both Tony Leung and Tang Wei are superb when it comes to acting. Everything is expressed in their eyes. The most intense love and hate are expressed with the touch of a hand or a quick turn of head.

But it is not really a Kar Wai Wong movie afterall, not just because the action packed sex scenes, but also because of the humorous dialog sprinkled throughout. They lightened up the mood, and made the 157 minutes seemed less lengthy than it sounds.

Ang Lee stayed very true to the original story by Eileen Chang. Some people commented on how he softened the cynicism in the story by changing the ending to be less cruel. Personally I liked Ang Lee’s version better. Maybe cuz I was never a big fan of Eileen Chang’s writing, which seemed too dark and suffocating for me.

Oh, I love Tang Wei’s hat in the movie, even though it didn’t look great on her because she has a round face. As i walked out of the theatre, the strongest images left on my mind were actually not the aerobic love making, but Tang Wei’s face. Everything that Ang Lee tried to convey seemed to exist on that very Shanghai 1930ish face: voluptuousness, beauty, desire, conflict, naive, fatigue, bewilderment, and finally confidence. That face said it all.