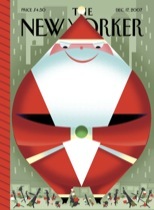 Starting this year, I either like every single article of a particular issue of the New Yorker, or none of it. I wonder if they alternate editors over there on the east coast?

Dec. 17th, 2007 is another issue that i love wholeheartedly.

I’ve only read 2.5 articles so far, all interesting.

– James Flynn’s “What Is Intelligence?” and the debate over race and I.Q., by Malcolm Gladwell

I.Q.s around the world appeared to be rising by 0.3 points per year, or three points per decade, for as far back as the tests had been administered. For some reason, human beings seemed to be getting smarter.

…If an American born in the nineteen-thirties has an I.Q. of 100, the Flynn effect says that his children will have I.Q.s of 108, and his grandchildren I.Q.s of close to 120 more than a standard deviation higher. If we work in the opposite direction, the typical teen-ager of today, with an I.Q. of 100, would have had grandparents with average I.Q.s of 82 seemingly below the threshold necessary to graduate from high school. And, if we go back even farther, the Flynn effect puts the average I.Q.s of the schoolchildren of 1900 at around 70, which is to suggest, bizarrely, that a century ago the United States was populated largely by people who today would be considered mentally retarded.

Interesting, isn’t it? Wait, but there is more…

To say that Dutch I.Q. scores rose substantially between 1952 and 1982 was another way of saying that the Netherlands in 1982 was, in at least certain respects, much more cognitively demanding than the Netherlands in 1952. An I.Q., in other words, measures not so much how smart we are as how modern we are.

Okay, so what does “being modern” mean? The following is a fascinating example:

The psychologist Michael Cole and some colleagues once gave members of the Kpelle tribe, in Liberia, a version of the WISC similarities test: they took a basket of food, tools, containers, and clothing and asked the tribesmen to sort them into appropriate categories. To the frustration of the researchers, the Kpelle chose functional pairings. They put a potato and a knife together because a knife is used to cut a potato. “A wise man could only do such-and-such,” they explained. Finally, the researchers asked, “How would a fool do it?” The tribesmen immediately re-sorted the items into the “right” categories. It can be argued that taxonomical categories are a developmental improvement, that is, that the Kpelle would be more likely to advance, technologically and scientifically, if they started to see the world that way. But to label them less intelligent than Westerners, on the basis of their performance on that test, is merely to state that they have different cognitive preferences and habits.

– Journey Into Night, by David Sedaris. Flying to Paris is so much better in business class, you can do almost anything you like.
– Treasure Hunt not on-line. 🙁 by Hugh Eakin. How a rare statue of Aphrodite became the focus of the fight over antiquities, and led to the fall of a Getty Museum curator.