So Danish Newspaper’s cartoon caused outrage in Muslim community back in 2005. Today’s issue cover of The New Yorker caused another controversy, and somehow Muslim related, too. 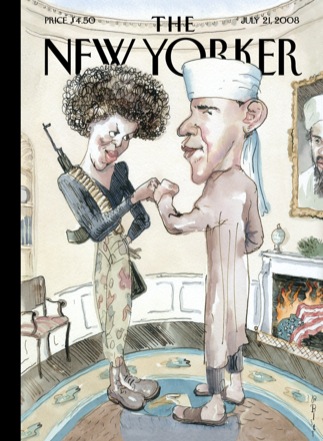 Personally i think it is just another over-reaction, similar to the first cartoon controversy, maybe milder. But in principle it is the same thing.

Since when American politicians are behaving like Chinese ones? So sensitive? and so thin-skinned?

In reality, aside from the lighthearted Sempe’s, most of The New Yorker cover art has always puzzled me. Always thought of that as The New Yorker style. Their satire has always been highbrow and seemed to be understood by a tiny group of people within their own club. They liked to pick some obscure but i’m sure highly amusing facts once you understood the context. I doubt they did anything different this time. Their only mistake is to pick on some facts that people could actually understand, or maybe just think they understand.