I just spent three hours in SFMOMA, until the final minute before their closing time. I was literally chased off the exhibition floor, because i had four more short films to go in the final theme “Soho and Felix”. What made leaving most agonizing was they kept showing the remainder of the films as they started chasing people out, why couldn’t i stay? just 20 minutes longer?!

Luckily our membership will last till summer. So i think i’m going back tomorrow to finish where i left off and maybe watch some of my favorite segments in various themes again.

Today is the first day of the opening of the show. Luckily many people are like me, they probably never heard of a South African artist called William Kentridge before. It was not crowded.

ZM stumbled on the exhibit by chance yesterday when he took his group of friends from New York there and it happened to be member’s preview day for the show. He came home all excited and told me to go, “So creative! Fantastic! Unbelievable work! We didn’t want to leave.”

It is probably one of the best exhibits I’ve ever seen anywhere in the world. My degree of enjoyment of the show is comparable to how i felt after seeing the Matisse-Picasso exhibit in NY MOMA back in 2003. The content are drasticaly different between the two. But my feelings were equally high, mesmerized, and satiated.

The material itself is mixed media, mostly animation films involving charcoal drawing, puppet, real footage, shadow play, and music/opera. There are also final drawings on display, as well as etching, collage, sculpture, and installation. The subject has a wide range, from lighthearted materials such as artist self-portrait, humor, love story, to sober political topics such as apartheid, soviet union’s prosecution, migration, and colonialism.

The diverse media, the fantastic imagination, and the cleverness sprinkled through William Kentridge’s works reminded me of Dali Museum in Figures outside of Barcelona, Spain. This is the kind of work that i think Dali would be creating if he was alive today. 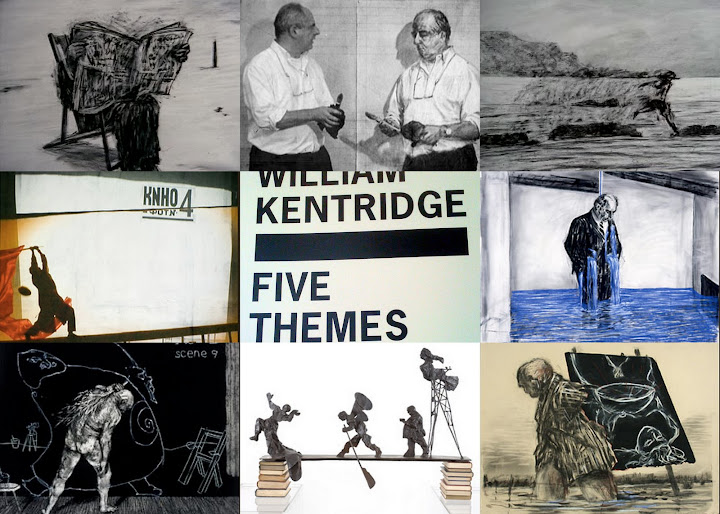 I love how he left charcoal smudge after he erased what was there before. It looked like the mark of memory in time, shadows of what had been when all things had passed… Then i read what William Kentridge had to say about these smudges.

The imperfect erasures of the successive stages of each drawing become a record of the progress of an idea and a record of the passage of time. The smudges of erasure thicken time in the film, but they also serve as a record of the days and months spent making the film – a record of thinking in slow motion.
– SF Chronicle, “William Kentridge: Five Themes at SFMOMA”

I love the three films in the Magic Flute theme. The operatic music, the miniature stage sets, and the mechanic controlled puppets taking turns came on stage.

I love the way he present multiple installation in each theme, and you have to watch all of them to see the multiple facets he had intended to tell one story. I’ve seen other modern art installation with multiple screens, but no one had mastered the interconnectedness as well as William Kentridge, and no one had made the experience so intriguing, enjoyable, and sometimes, beautiful.

I love the title of one short film in the theme “Soho and Felix”, when his wife left him, Soho’s empire started crumpling physically (this film was made in 1991 i think, but the crumpling of tall building eerily resembled 911). At the end, over the flat world filled with ashes, stood Soho alone, and the sky was filled in with big block letters, “Her Absence Filled the World.” It almost made me cry. Just almost.

will try to write tomorrow after i see the remainder of the show… The SF MOMA site did a good job presenting this exhibit as well. The interactive feature is especially interesting.

Just found the press release from SFMOMA regarding the exhibit. It is organized by SFMOMA and Norton Museum of Art in West Palm Beach, Florida. After premier at SFMOMA, it goes to Fort Worth, WEst palm Beach, New York, Paris, Amsterdam, Vienna, and Jerusalem in 2009-2011.

Don’t know why it has to hide in such a pdf instead of on the site page itself, but the Five Themes are:

The exhibition catalog will include a DVD containing films by Kentridge and some background on their making.
It will also contain comments on his work never published before. Kentridge turns out to explain his art as brilliantly as he produces it.
– SF Chronicle, “William Kentridge: Five Themes at SFMOMA”

Definitely getting the exhibition catalog! 🙂

Quality of his video on youtube is not very good, these two are less shaky so you won’t feel dizzy watching, might gave you some idea on some of his methods.