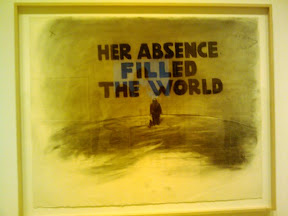 Went to SFMOMA again this afternoon. Turned out it is a “family day”, i.e. free admission to all!

Finished watching the remainder of “Soho and Felix” series, and watched “HER ABSENSE FILLED THE WORLD” again.

Walked through the entire exhibit from beginning to the end a couple of more times, spent time looked at the final drawings, browsed through all the series again, including some of the films.

Realized that another powerful element of all of his work is the music. Really great music that matched the story telling on the screen really well.

My least favorite of the five series is “the Nose” on Soviet, cuz it seemed the most abstract and too slogan-like. The one touched me the most is “Soho and Felix”, it is the most personal and romantic. The funniest and most enjoyable and lighthearted is “Artist Studio” – while paying tribute to movie techniques, i think his presentation was the most clever and varied. “Shadow Procession” was beautiful to watch from artistic point of view, but the subject is too brutal and harsh for a second viewing, i couldn’t bear it. “Magic Flute” was thought provoking, but similar to “Shadow Procession”, subject is too heavy, that i couldn’t watch it again, especially the “Black Box” piece.

A New York Time article on the exhibit and William Kentridge at large: Nosing Around in Many, Many Forms . In addition to the article, it listed a few video clips that are worth watching.

Bought the exhibit catalog. But haven’t watched the DVD yet. I think i’m a little over-dosed on all of his arts and ideas. Would need to take some time to get a little distance before diving back in again… When i do, there will probably be a third installment on William Kentridge. 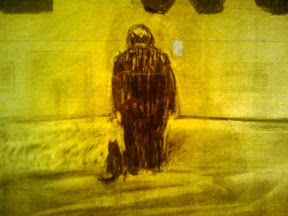