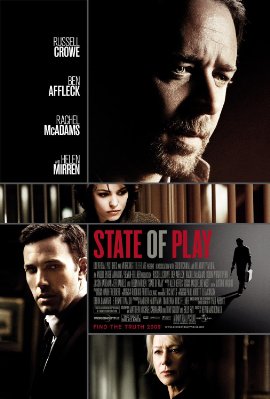 It is a tightly constructed story about special reporting done by serious journalists at a fictional newspaper “Washington Globe”. In addition to the familiar elements on any major story that could break out in Washington D.C. – a rising star Congress man, a sexual scandal, multiple murders, a possible corporate conspiracy, a couple of truth-seeking reporters, some not so competent cops, many corrupted officials – the plot has enough twists and turns to keep audience interested.

I enjoyed the movie and i couldn’t say i had figured out everything before the main characters did. So that’s quite something.

What interested me even more was the ever persistent undercurrent played out through out the story: the future of traditional paper based newspaper.

When the final credit started to roll, the curious audience who stayed till the end was treated to an educational quick documentary on how a newspaper comes into being – creation of the layout, converting layout into photographic negative, etching the newspaper image from the negative onto an aluminum plate, placing the plate onto the printing press, cutting the final paper, collate the papers into one set, bundle them together, load them into trucks.

It was a bit nostalgic to watch. Even though one of the main characters, the blog writer working along side the serious real journalist, said serious story like this should be read on paper. It is obviously something the script writer wants to believe, but i hope he has enough sense to understand he is simply romanticizing a lost cause.

The Internet is fast displacing the paper based newspaper as the main information source for the readers. It is a matter of time before serious journalist acknowledge the writing on the wall. Given the technology we have today, given the ease of publishing any story on line, why should we keep serious journalist special report to an outdated 19th century technology, as beautiful as it looked on screen, it is so redundant.

It reminded me of the scene in another movie, duplicity, where Clive Own character asked Julia Roberts character running around in a vast office building looking for a compromised copier in some random employee’s office to sent a copy of a “top secret” formula. While all she really needed to do was taking a photo of it with her cellphone and sent it out as an email attachment or a MMS message.

However beautiful and incredible piece of achievement something may look, an industrial process or a dinosaur, when environment changed, then it either has to adapt to that new environment or become distinct.

Still, it was a little sad to watch the end of something so beautiful.

When I ask him if human editorial judgment still matters, he tries to reassure me: “We learned in working with newspapers that this balance between the newspaper writers and their editors is more subtle than we thought. It’s not reproducible by computers very easily.”

I feel better for a minute, until I realize that the only reason he knew that I wasn’t so easily replaceable is that Google had been looking into how to replace me.