Saw a picture of Pompeii which suddenly reminded me of my favorite place in Turkey: Ephesus. Dug out our trip photo from Ephesus, flood of memory came back. 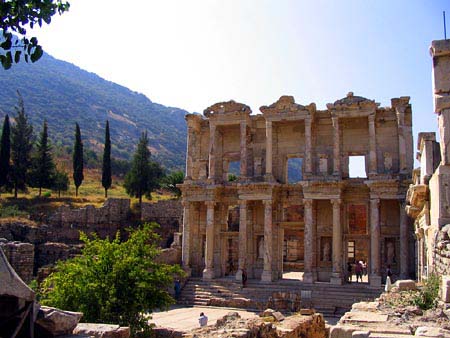 Gui asked me which of the two came first. I thought Ephesus was an ancient Greek city. Since Pompeii was Roman, that puts Ephesus before Pompeii.

Wikipedia browsing turned out more detail dates. Ephesus was founded earlier than Pompeii, 10th century BC versus 7th century BC.

Ephesus (Ancient Greek Ἔφεσος, Turkish Efes) was an ancient Greek city on the west coast of Anatolia, near present-day Selçuk, Izmir Province, Turkey. It was one of the twelve cities of the Ionian League during the Classical Greek period.

But the key difference is the fact that Pompeii was abandoned/destroyed earlier than Ephesus. 79 AD’s volcanic event froze Pompeii in that era. But Ephesus went on living.

After Rome Republic, Rome Empire, Ephesus started its slow decline during its rule under Byzantine Empire. Throug earthquake, Arab invasion, and the silted up receding river, this once great ancient metropolis slowly dwindled into a little village. its past grandeur buried and forgotten.

My favorite structure “Library of Celsus” was complete in 135 AD.

The put Ephesus square in the middle of Roman Empire period. What i saw and what i loved in Ephesus were mostly Roman. 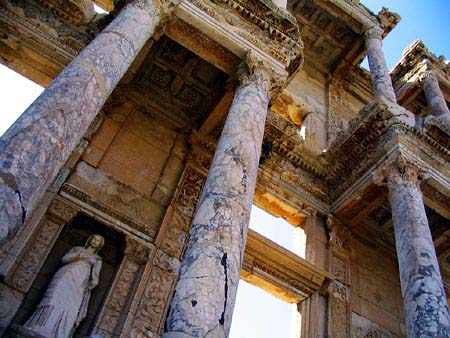 Beautiful Marble Columes and Carvings of Library of Celsus

I wonder if i would see anything as beautiful in Pompeii?